I was trying to install the vCSA 6.0,  it was failing with the below error “Failed to Start Services. Firstboot Error”.

After sometime spent on the troubleshooting and few re-installation ,I realize the tab for the networking – Choose the network in which our VC vlan’s were missing and it was showing that Non-Ephemeral port groups are not supported . On my previous Installation I was trying without selecting any vlan with just the IP and other info…

Again I started the Installation and found that it is clearly mentioned that Ephemeral port group is must for the appliance and later we can change it to other port group.

And the Next challenge is changing the port binding from the default Static to Ephemeral which cant be done on the portgroup which has already pointed to the VMs\Hosts .I think in general most of our environment is configured with the static binding by default and If we try to configure on the port group running VMs then it will show the below error.

So we need to create the new port group with the Ephemeral settings to some-other free vlan or new vlan and once the Installation is done then we can change it to the appropriate vlan. 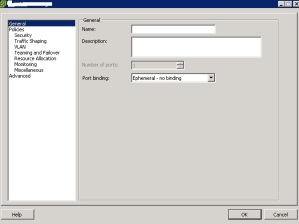 Another Important thing to be noted is after the IP change , we need to make sure to change the DNS Entry which should resolve to the proper Name and the IP.

DNS with proper FQDN and IP have to be created prior to the VCSA deployment or it will fail with the error”Firstboot Script Execution Error – The Supplied System Name is not Valid”.

To find the reason for the VMware  recommending to go with Ephemeral and to learn more about it , Pls check the below reference link.